Which One To Go For?  Corded Or Cordless When It Comes To Orbital Sanders? 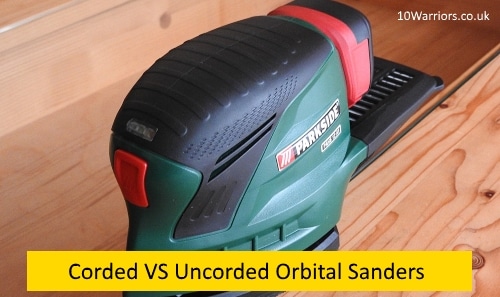 For most people, choosing a corded orbital sander will “probably” make the most sense, however for some, a cordless version will make more sense.

However to help you make your mind up here I have done a comparison on the pro’s and con’s of each type.

Ask yourself the following:

Where will you be using the Orbital sander the most?  Indoors near a power socket, or mainly out and about on jobs?

The obvious two possible answers should help you focus in on the right answer.

Maybe having one of each type will make the most sense?

The best orbital sander for you will not be the best for someone else.  You all have your own tool needs.

So below Ive broken down a few pointers:

Even though we are not talking hundreds or thousands of pounds here, cost does become an issue, and  areal “pain in the neck” once you’ve bought a battery version and then after realize you need to buy 1 or 2 extra batteries.  A real bargain then turns out to be a bit of a burden.  Companies like Ryobi do have universal battery systems (called the One+ 18V battery) that fit most of their tools, but then that means you are tied into one brand, and this is down to your own personal preference.

Cordless models:  Bosch professional with 2 batteries is around £250.  For the unit without the batteries it’s around £80

Of course, more power means you can get jobs done quicker and easier, instead of willing the sander to sand down using mind control.  It’s really no fun if you have a lot of sanding to get done and it performs more like a hair dryer on it’s last legs.

In terms of how long the orbital sanders will last, there is not much difference for long term use as in things breaking.  However when it comes to using on a daily or hourly basis you can’t fault corded versions.  Batteries only last so long (up to an hour) in most cases before they need recharging.  Batteries also eventually develop “battery memory” where soon they don’t charge as fully as they can do, and they then soon don’t last as long as they could do.

You have to figure out the real life aspects of using an orbital sander.  Generally sanding jobs are not a quick 3 minute job like using a drill, and can become quite time intensive.  You often will need to bring your work piece into your workshop to clamp it inspect it etc. so you may find that most times you will be using it inside rather than outside.   Corded seems most practical.  You can use an extension cable if you do the odd bit of work outside too if needed.

The only issues to think about are when using a sander safely.  Wearing proper eye wear, not having any loose clothing or loose hair that could get caught up.  With the extra weight of a battery you can find your hands and wrists will get tired much quicker and this could affect your work if you are going to be orbital sanding for any length of time.  With a corded version at least that won’t be so much of an issue but you do need to be wary of the power cable and keep in mind general risks of working with high voltage electrical stuff.

For most short duration jobs, any orbital sander will be just fine.  The issue comes if you are going to use the sander for longer periods.  Even the strongest people in the world will get tired wrists if they use a tool for so long.  If you stand up and hold your arms out in front of you eventually they get tired.  Hold some weights in your hands and that tiime becomes much less!  So the same thing goes for using tools.

Pro’s and cons of ownership of orbital sanders in summary:

Cordless is great for the practicality and for outdoor working, but expect to pay more for the convenience, and then some more for extra batteries when the first one decides to go to sleep.  Cordless can’t electrocute you.

Corded will give you full on power all day long but you do need to be near a power socket or extension cable.  Risks involve tripping over the power cords, and there is always the extra risk involved with using any mains powered electrical device.  However they are lighter and not so clunky in your hands.

Long term I think we are conditioned to using mains powered devices far more where battery versions don’t really last too long and add in the extra weight.  Soon mounts up when you’re trying to use them for a good length of time!

Have you got an orbital sander?  Is it a cordless or corded model?  Please let us know in the comments how long you’ve had it, what you use it for and if there are any points about it that you like/love/hate.

On a personal note as I don’t do a lot of DIY, I’d probably go for a cordless version and just keep it charged in the garage ready.

I already own a cordless dril which works well for most situations except the heavier stuff.